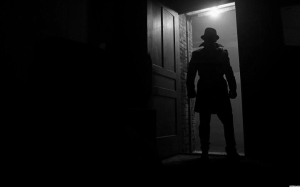 Drew swung the blunt end of his firearm at Jason’s already-bruised skull. The sheer impact of the hit, knocked Jason unconscious instantaneously as his barely breathing corpse flopped to the ground. “The Fuck, man?! He wanted him alive. You’re a dead man, Drew!” panicked Arthur, walking over to the half dead body with his hands on his rapidly reddening, usually pale face. Without a word spoken, and no change in expression, Drew picked up the body gently and flung it over his left shoulder effortlessly, almost as if it was a sack of potatoes. He quietly walked over towards the property, with Jason hunched over him, and flicked what was left of the cigar onto the firm, dry, yellowing grass, without acknowledging anything Arthur had just said to him.

Drew kicked the door of the house open, damaging the lock in the process. He gently lay out the out-cold body on the lower bunk, while also checking for the pulse on Jason’s wrist, secretively. It was as if he actually cared whether or not the victim of his own doings was alive or not. Maybe it was the words of his accomplice , which he completely ignored at the time, that was worrying him…

Drew put his broken glasses back on as he took off his khaki jacket, which contained the gun, and threw it into the corner of the small room of a house that was. It landed with a loud thud, louder than you would expect from a jacket containing a heavy weapon. There was something else in his pocket. He then advanced towards his jacket, immediately pulling out a handheld gaming device of some sort from one of the pockets. It was broken, very cheap and clearly hadn’t been used to play games, quite unusual for a man in his mid-forties to carry around with him. He then split open the casing of this device with his bare hands, revealing the interior of the Gameboy which had been pulled out completely, making it perfect for storing small objects discreetly. Drew placed something into the hollow gaming device, and clipped it shut once again, placing it onto a nearby wooden shelf, all while repeatedly looking back to see if there were any prying eyes.

The distant sound of foot steps became louder and louder. Soon, Arthur arrived, assessing the state of the broken door lock whilst walking in. “He’s alive” reassured Drew, before Arthur could let out a word. Which was just replied to with a sigh, this time from only Arthur, himself. Both men, looking lost, stared into each other’s eyes, almost as if they were anticipating something. The tension in the room could’ve been cut with a knife. Pure silence, a rarity when Arthur was about.

Arthur immediately slipped his hand in his over-sized jean pocket, and held up a very old, vibrating, Nokia phone to his ear, pressing the answer button in the process. He didn’t say a word, but instead just listened. The phone call lasted little more than ten seconds, seemed as if it was very one-sided and not one that was intended for conversational purposes at three o’clock in the morning. Drew looked up to Arthur, nervously, expectant of an explanation of the phone call.

“What do you mean he’s coming? He can’t be. He isn’t supposed to be within a dozen miles of this place.” said Drew with a hint of fear in his voice.

“I’m telling you, he’s coming” reasoned Arthur, pressing his fingers on to his bushy eyebrows violently.

“He‘s Here” interrupted a deep voice, in what could be described as a foreign accent.

A man in a long brown coat appeared at the doorway, fixating his top-hat securely on his head after gliding his chubby fingers through his slicked, greasy, black hair.

“P-P-PIEDRO?!” gasped Arthur, turning around to face the fierce-looking man, backing away from him steadily, looking petrified….

Right, so that’s the end of Chapter 2 of The Kidnapping. Stay tuned for Chapter 3, releasing next week!